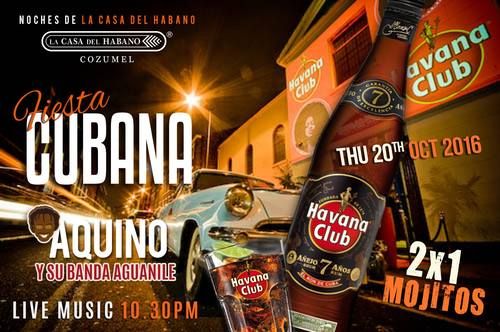 October saw several changes in the Salsa scene here in Cozumel.  For the whole month, salsa hotspot Tiki Tok Restaurant and Bar was closed for renovations.  This means beginner's group salsa class was also cancelled until the club reopens.  Lots of changes seem to be happening at Tiki Tok, so we are all eager to hear what's in store when they  reopen.

The municipal orchestra Cuzamil Band was also dissolved in October.  The new mayor  of the island decided the orchestra was no longer a necessity for the town.  Cozumelenos will greatly miss the band playing every weekend during the evenings in the plaza.  We await word from the new mayor if she will provide other musical talents for locals and tourists in the main plaza.

Despite these closings and endings, there's no stopping the Salsa musicians in Cozumel.  A new Salsa night was announced on Thursdays at La Casa del Habano.  For two weeks in October, Aquino and his Aguanile played Thursday-Saturday nights while the restaurant's rock band was on vacation. Salsa dancers flooded the packed floor each night to show support for the band's new gig.  To end the month with a big bang, the band even played at the Spooky Salsa Party on Halloween night.   Now that they are back to their regular schedule at La Casa del Habano, Thursday will be their permanent Salsa night with Aquino's band entertaining Salsa lovers at 11 pm each week.

Really trustworthy blog. Please keep updating with great posts like this one. Dancing is recreational and entertaining. It creates a social life for us, while affording us the opportunity to make new friends.